Covenant of Trust - A Review 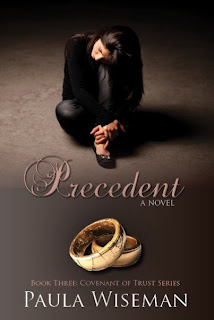 
The Molinskis thought life was okay – at least until Bobby discovered her husband was having an affair with a co-worker. The events, the emotions, and the impact of Chuck’s choice on the family, friends, and colleagues caught them off-guard. Only God could weave a path through the mess in which they found themselves. And he did. Though God seems distant at times, he continued working in their lives.

Contingency focuses on the period immediately after the discovery of the affair.

Indemnity focuses on the child that was born as a result of the affair. Tracy, the child’s mother, had hidden Jack’s existence from his father for six or seven years of his life. Jack was a shock to both Chuck and Bobby – they both had to deal with the new son that God brought into their lives.

Precedent focuses on the loss of two children from the Molinsky family – one shot to death in a gangland shooting, the other a run-away, feeling unloved in the aftermath of the shooting.

It is only as Chuck and Bobby cling to their faith, alas, at times, a weak faith, which God is able to use to bring them through the crisis that their family must face. Pastor Glen and his wife Laurie are present for support, but they understand that their answers are only poor attempts to bring meaning to the Molinsky’s lives. What they find is that real answers are rooted ultimately in the Grace of God.

Lest anyone think that the emotion and events are beyond belief, my experience as a pastor, a husband, and a parent, and my education as a pastor and a counselor, allows me to confirm the feelings echoed throughout the Molinsky story.

The books not only tell a story, but they also touch the heart. Each book had times where this reader had to deal with his own emotions – laughter and tears flowed as I read this family’s story. The emotions echoed those I felt as I struggled to rebuild my own marriage when it seemed it would fall apart. And, having lived through the recovery process that was needed, the book still helped me understand the emotions felt by others in my family as they moved through that time in our lives. As Paula Wiseman describes, God is able to pull individuals and families from the deepest pits, if we can be patient and allow Him to work at His schedule. That is not always easy.
______________
This review is based on free electronic copies of these books provided by the author for the purpose of creating this review. The opinions expressed are mine alone.
Posted by Pastor Floyd at 9:14 PM No comments: