Edited By
Bill and Gloria Gaither

I am not sure what I was expecting; but given the size of this Bible, I did expect something more substantial than what I found. The book is clearly a devotional Bible, not a study Bible. Devotions are prepared by many members of the Gaither Homecoming "family". The history and sources of about one hundred sacred songs (hymns and more contemporary tunes) are included. I would have loved to have a DVD or an on-line resource to access mp3 versions of the many songs. It would have added some value to the book. As one reviewer said, if you are a fan of the Gaithers, you will enjoy this Bible edition. Others may find the book to be of less value - though reading the scriptures, in whatever format, is of great value.
Posted by Pastor Floyd at 12:29 AM No comments:

Understanding Theology in 15 Minutes a Day - A Review

Understanding Theology
in 15 Minutes a Day 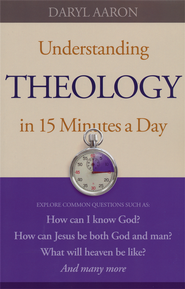 It was a little over a month ago that I stumbled upon a classic theology book by Gordon R. Lewis, Decide For Yourself.  This small book provided a workbook that guided individuals toward discovering their own theology - rather than being fed a canned theology.  Alas, this small paperback is nearly out of print and is very expensive, if it can be found.

Daryl Aaron’s book attempts to accomplish some of the same thing - though, rather than being a workbook, it is a monograph that works through the various important issues of theology.  The 40 chapters start with the nature of theology itself (a discussion included in most theological texts) and end with a discussion on the nature of the church and the end times.  Dr. Aaron attempts (and succeeds) to write an unbiased synopsis of the various positions that have been taken by scholars in the theological literature.  He also is careful to state his own opinion - though putting the summary of his opinion in a section separated from the main body of his text at the end of each chapter.

Each chapter discusses a major issue in theology.  The ideas are presented objectively and include scripture to support each opinion.  Because the book is rather small, each chapter is in reality only a summary of the various opinions.  Though references are provided, they do not provide significant guidance for the reader to really do additional study on their own.  The other major absence is the lack of an index.  Though terminology is used throughout the book, there is no way to find where a particular term is referenced in the book.

The book is readable by the average layman and would serve as a good book in a Sunday School class or small group study.  It would also serve as a helpful handbook to use along with Lewis’ Decide For Yourself, mentioned earlier.
______________
This review is based on a free copy provided by Bethany House, the publisher, for the purpose of creating this review.  The opinions expressed are mine alone.
Posted by Pastor Floyd at 12:04 AM No comments:

Spies and Lies - A Review

Posted by Pastor Floyd at 12:24 PM No comments:

The Romanov Conspiracy - A Review

Posted by Pastor Floyd at 5:47 PM No comments:

I have added a number of books to my Kindle over the past 24 hours.  These books have all been provided by the publishers for the purpose of creating honest reviews over the next few weeks.  I kind of think of these books as being the books on my nightstand - which is not a bad metaphor, since I do keep my Kindle on the nightstand at night.  If I wake up at 3:00 AM, I will then have something to read.  Okay here is the list, along with some comments as to why I chose these particular books.

Posted by Pastor Floyd at 7:34 PM No comments:

A Hobbit Devotional - A Review

Posted by Pastor Floyd at 6:51 PM No comments:

Hind and Seek A Review

Posted by Pastor Floyd at 5:37 PM No comments:

The River: A Review

The River is alive.The River is timeless, and it's moving all over the world.I find myself drawn to the River.
-- Gabriel Clarke's Journal

The River is the story of a boy who becomes a man.  It is the story of misunderstood loneliness, anger, and lose.  Yet it is also a story of forgiveness and understanding – that only time can bring.   The story begins in an airport as two passengers wait for a delayed plane in Denver.  As Gabriel Clarke begins to tell his history, the book moves back several decades, to the day that 5 year old Gabriel Clarke would lose his father to The River.  It was on that day that Gabriel began to feel the hatred, the confusion, the anger, that he had for all those associated with The River.
The next fifteen years were spent living with his mother in poverty.  The community was supportive of the family, but not many would support the hurt that Gabriel faced as he continued to deal with the loss of his father.  He would find himself going to his “secret place” to find some solace – but it never seemed enough.

Gabriel would occasionally cross paths with The River – with his landlord, Mr. Earl, on a fishing trip; with the town boys, who would gather at the pond.  It felt good, in spite of how others treated him – but he did not know why.

At twenty Gabriel would join some of his friends and their college friends on a trip to Colorado that would change his life forever.  It was not a quick change – it would take most of the next six months.  But that trip to the River - with the white water rafting, with Meredith, with Ezra, and with Jacob – would change the direction and the momentum of his life forever.


God would bring an amazing set of events together that none of the characters, the writer, or the reader, could have anticipated.  God intervenes in the life of this young man in unexpected ways.  And once He did, Gabriel’s adventures would be just beginning. The grace that God showed to Gabriel that spring and summer is an example of the grace that he offers to each of us.  Michael Neale makes it clear that God's grace can be found even in the most difficult circumstances, if we will take time to slow down and listen to Him in the midst of our busy lives.
______________This review is based on a free electronic copy provided by the publisher for the purpose of creating this review.  The opinions expressed are mine alone.
Posted by Pastor Floyd at 6:08 PM No comments: