Wining and Dying - A Review 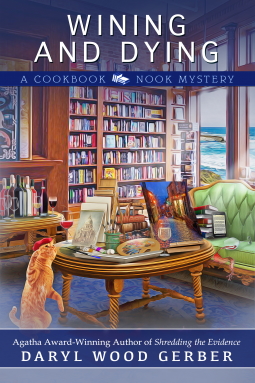 Within the waves, in India ink,

he had written a quote by Mahatma Gandhi:

“You must not lose faith in humanity. Humanity is an ocean.
If a few drops of the ocean are dirty,

the ocean does not become dirty.”

The author has created a weak cozy mystery that spent too much time describing the clothing worn by the various characters rather than developing the mystery behind Quade’s (a character with a single name) murder.

Set in the seaside community of Crystal Cove on the Northern California coast. The small town is famous for its lying in the midst California’s wine making country and for being an artists’ colony in its own right. It was the week of the 5th annual Art and Wine Festival and at the end of day one Quades’s body had been found in his hotel room. It seemed that everybody was a suspect - both because the guilty party was not known and because everybody seemed to have a motive. Jenna Hart was the amatuer sleuth; Cinnamon Pritchett was the Chief of Police. The question became could they work together to eliminate the innocent and stumble onto the guilty. Cinnamon did not think so, but it seemed that unplanned circumstances would force them to do so.

Beginning with chapter one, we are inundated with clothing descriptions - and it does not stop. Rarely when a new character comes on stage, the author has to take a sentence or two to describe their color and styles being worn by the newly arriving character. These descriptions may have lengthened the book, but they did not improve the plot for this reader. I did appreciate the way the author wove the names of actual artists into the story (e.g. Veraluz, Diego Rivera, and Roland David Smith) along with fictional ones. I found myself, more than once, seeking more about these real artists via Google as I read. I give the book four stars.
______________
This review is based on a free electronic copy provided by the publisher for the purpose of creating this review. The opinions expressed are mine alone.

Posted by Pastor Floyd at 5:36 PM No comments: 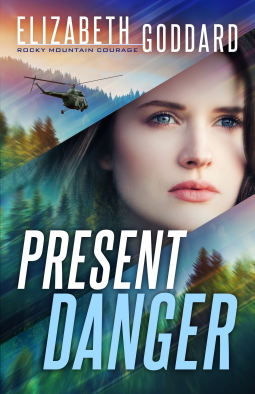 “The direction your life takes

can often come down to

one moment in time.”

Elizabeth Goddard has created another great faith-based thriller set on the Eastern slopes of the Rocky Mountains. Beginning with a plane crash in chapter one and ending with the cliff rescue in the book’s final moments, the author managed to hold this readers attention

With the focus of antiquities dating from the American west to the Middle East, we get glimpses of how lives are made through the decisions we make - whether they are made by people with hearts of gold or full of evil. Grayback County Sheriff Detective Jack Tanner and US Forest Service Special Agent Terra Connors both have made decisions that effect their lives even today, yet they will need to work together to find those responsible for the three deaths and the associated theft of ancient artifacts. In doing so they will need to face the decisions that they and their families have made in the past.
This “can’t put it down” book has a place in the church library, in the public library, and in the home of any reader looking for a colorful adventure. I give the book 5-stars.
______________
This review is based on a free electronic copy provided by the publisher for the purpose of creating this review. The opinions expressed are mine alone.

Posted by Pastor Floyd at 2:41 PM No comments:

Frankly, I was disappointed in Krista Davis’ latest effort. I have enjoyed her books in the past and was looking forward to reading her current effort. On the other hand, I found the book somewhat boring. The cast of characters was long - with people, cats, and dogs, all playing significant roles This problem was addressed somewhat by including a list of 22 characters before starting the story proper - where she intermixes people’s and pets’ names.

The town of Wagtail was an appropriately named North Carolina village including water access, parks, and stately homes. The village catered to its pets allowing them open access to most areas, except for the local hospital. I was surprised the county health inspector allowed pets to enter and eat at restaurants throughout town, which provided specialized menus for cats and dogs. The book concludes with a series of recipes - read these carefully, some are suitable for pets, some are suitable ONLY for people. One pet recipe includes a potentially poisonous ingredient for dogs. It is clearly labeled but requires a careful reading of the peanut butter label before use.

I give the book three stars.
______________
This review is based on a free electronic copy provided by the publisher for the purpose of creating this review. The opinions expressed are mine alone.

Posted by Pastor Floyd at 5:47 PM No comments: 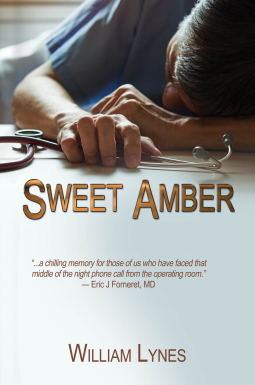 He was an alcoholic. He knew it. He did not care.

He lost his family. He lost his reputation. And he was about to lose his medical license.

He had been drinking the night of the governor's surgery. Both before and after the surgery. He had been charged with a DWI that night on the way home.
And the governor had died.

Two questions remained: Who was responsible for that death and what was Dr. Lee W. Hickok going to do about it.

Sweet Amber addresses the problem of alcohol within the medical community - looking at the issue from the perspective of the alcoholic, the medical staff, and the patient. Each part of the triad contributes to the problem. And each has a responsibility to address the problem - or suffer the consequences of their choices.

The author uses a fictional episode at a major hospital in Galveston TX to illustrate the issue from the perspective of mid-1980s medicine. It would seem appropriate to include a final essay addressing the issue in light of 21st century medical care. Alas, the author does not do this, leaving the reader to research and reflect on how the issues are played out in a more modern setting. The book does have a level of suspense and is stomach turning at times. At the same time, we see evidence of God’s grace working in the lives of a broken physician and his friends and family. I give the book four stars.
______________
This review is based on a free electronic copy provided by the publisher for the purpose of creating this review. The opinions expressed are mine alone.

Posted by Pastor Floyd at 5:10 PM No comments:

Danger On The Loch - A Review 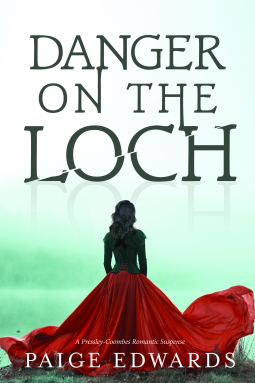 Covenant Communications (the publishing arm of the LDS Church) presents a well-written faith-based novel that seems more like a romance novel than a suspense novel. Having said that, it did hold this reader's attention. Though the action begins in Virginia, it quickly moves to Scotland where Paisley finds herself in the midst of a mystery that would threaten her life and the lives of those around her.

Though the reading was a bit slower than I would like (romance might do that for me), the scenery, locations, and people of Scotland provided an interesting backdrop for this charming novel. I give the book four stars.
______________
This review is based on a free electronic copy provided by the publisher for the purpose of creating this review. The opinions expressed are mine alone.

Posted by Pastor Floyd at 6:46 PM No comments: