Murder in G Major - A Review 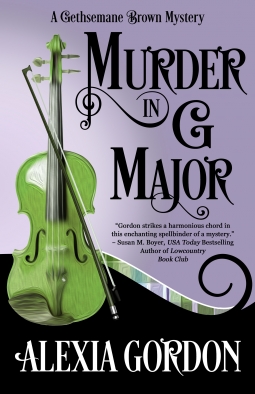 Gethsemane is a lost soul. She has lost her job, her fiance had a mistress, and the ghost in her current home is convinced that he was not guilty of his wife’s murder or of his own suicide. Too make matters worse, she had six weeks to turn St. Brennan’s all male, middle school, orchestra into a championship team that must win the 75th Annual All-County School Orchestra Competition - an award they had not won since the inaugural competition - if the school was to get the grant they needed to rebuild their music performance hall and Gethsemane Brown was to keep her job.

Though my description of the story above may sound convoluted, the author has done a very competent job of weaving the various threads into an enjoyable story that is neither boring nor simplistic. Additional murders accumulate like a rock collector gathers rocks.  And, like in any well-written cozy mystery, the problems are all resolved.

Except, as the final page is read, the reader is left unsure if Gethsemane Brown will keep her current job, we do not know what has happened to the friendly ghost that occupied her home, and what can we say about Frank, the math teacher, and Inspector O’Reilly, the local cold case squad?

As a maestra with talent, whose career seemed to about take off, Gethsemane Brown is ready for the big time. When she finds that the boyfriend who recruited her to conduct a major orchestra is already committed to his mistress, she finds herself stuck - stuck in a small, Irish, boys, school - for which she is neither trained or equipped. But with the help of “Irish”, the ghost, she begins to move forward, both as she builds relationships with her students and as she solves the mystery surrounding the deaths of her ghost and his wife.

A great Halloween read, Murder in G Major will fill some the space between labor day and Thanksgiving (USA), which may also introduce the reader some unknown (at least to him or her) classical music that might make a great play list on Pandora. And after reading the current book, the reader will be wanting more and more of Gethsemane Brown and the kooky townspeople of Dunmullach, Ireland.
____________

Posted by Pastor Floyd at 3:06 PM No comments: 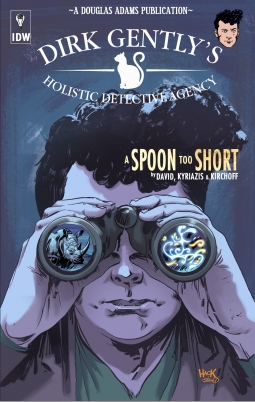 
It was just a few weeks ago that I first met Dirk Gently via the BBC television series being streamed on Acorn.TV.  The stories originated in book form were written by Douglas Adams of Hitchhiker’s Guide to the Galaxy fame.


At about the same time I stumbled on this graphic novel featuring the self same private eye, Dirk Gently.  The current case take Dirk to Africa where he finds visitors and members of an isolated village have lost the ability to communicate. Finding the solution to the current crisis will take all the holistic know how that Dirk can muster.


The graphic novel echos much of the same humor found in the TV shows - a bit of science, science fiction, and nonsense, merge together to make for an interesting tale. Dirk is not a reincarnation of Sherlock Holmes, but he does manage to follow the clues to a logical (or is it illogical) conclusion. For the fan of Douglas Adams, British mysteries, or British comedy, the series represented by “A Spoon Too Short” may fill the bill nicely - especially on a cold winter night.
______________

Posted by Pastor Floyd at 4:14 PM No comments: 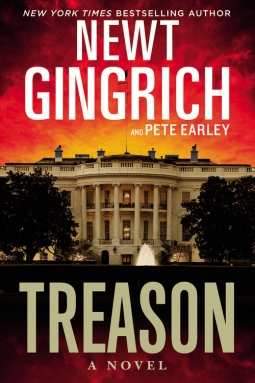 by
Newt Gingrich
and
Pete Earley

Some books I look forward to reading. Others I figure I will give a try, but do not expect much. And there are some that I choose to review, but really expected to be disappointed. This was one of those. I was wrong.

The second book of a series coming from these authors, the book stood relatively well as a stand alone novel. The few parts dependent on the earlier book were written into the text not leaving the author in the dust.

Beginning with an attempted (actually two attempts) assassination of the US President, Major Brook Grant is drawn into a treasonous attempt to take down the American government. The evidence mounts up in the hallways of Congress, in the Washington DC metropolitan area, and in the dry heat of the Middle East. Neither the protagonists or their families are safe from the deadly plans of the Falcon, the moniker of terrorist associated with the Islamic State.

The book if a political lesson in how different Americans view the Islamic threats seen around the world. Characters in the book represent several of the view expressed in the daily news - some totally committed to keeping Islam and its terrorist leanings from American soil, some committed to the freedom of speech that allows this same terrorism to co-exist in the American culture, and others who understand that freedom mean letting those we disagree with live in peace within the same space we occupy. Answers are not provided, but the book does provide a door to communication.

Surprisingly, though the book is not an openly Christian book, I would think it could easily be found on the book lists of some major Christian publishers. Faith plays a positive role in the lives of characters as they develop throughout the story. Thus, the Christian reader may find themselves satisfied with the story as it continues to develop in the next book of the series - drawing in the political power of a deadly North Korean government.

My only disappointment in the book was the occasional writing style which at times seemed more like a seventh grader’s writing using short, staccato like sentences. The author moved in and out of this mode and did not leave this reader feeling too disappointed, though this writing style showed itself two or three times early in the book.

For the reader looking for a political thriller, a terroristic drama, or good solid summer read, TREASON may just be what the doctor ordered.
______________

Posted by Pastor Floyd at 3:32 PM No comments:

Other People's Baggage - A Review 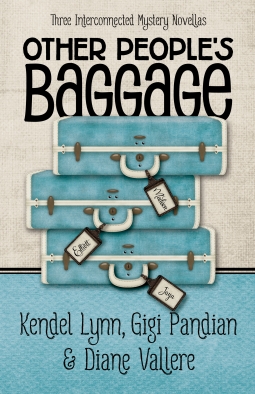 Three stories for the price of one from two of my favorite authors and one new one make for a good deal. The stories have nothing in common - except for the lost luggage that belong to the main characters of the other stories. Together they form a trio of exciting novellas that prepare the reader to enjoy the longer novels that provide sequels to three stories provide here.

Each story is about a third of the length of a regular novel - though I was familiar with three of the authors, none of the three stood out as being great, but they each were enjoyable in their own right. I felt lucky to have the opportunity to review the book/stories.

The stories, being prequels to earlier published books, can be read as stand alone stories or they can be read later in the sequence, helping the reader to understand some of the events that brought the character into the situations we find in the corresponding novels. I enjoyed the break from reading novel after novel - reading these shorter works were a nice break from my usual fare.
______________

Posted by Pastor Floyd at 5:14 PM No comments: 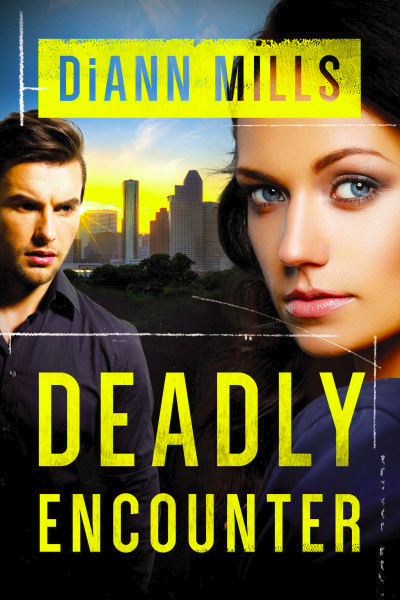 
There are a number of things that draw me into a fiction book.  A number of them are obvious: the quality of writing, the realism of the characters, the well designed setting of the story. One of the less obvious characteristics of a fictional story that I appreciate is its use of historical or real life settings that I call for me to search even deeper into the history or setting using Google or other internet resources.


Deadly Encounter was such a book.  My attention was drawn to a Google search before I finished page 1 of the book: “Who or what are the Houston Airport Rangers?” The book did answer the question a few pages in, but I found myself in Google within minutes of starting the book.  Sadly, Google provided little more details than the book - but enough to get me further into the book while I waited for the author to offer more own description.


The book dealt with themes that have attracted me in the past - Addiction/dysfunctional families, terrorism, and romance (but not too much). Mixing these themes with an underlying Christian faith, and we have a story that is both exciting and satisfying. We see individual’s faith being challenged and growing. We see faith being lived out. We also see the various conflicts that must be faced by modern law enforcement as they face the 21st century culture found in the USA.


Looking for a book with a positive Christian focus, with the right blend of suspense, danger, and romance? Deadly Encounter may be that book.
______________
This review is based on a free copy provided by the publisher for the purpose of creating this review.  The opinions expressed are my own.

Posted by Pastor Floyd at 5:16 PM No comments: