A Theory of Everything (That Matters) - A Review


A Theory of Everything
(That Matters) 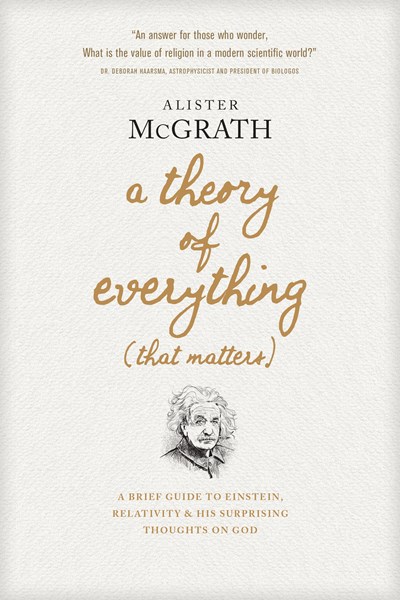 I am not a physicist. But like many physicists, I barely understand Einstein and his theories if Special Relativity and General Relativity. And like most physicists, I know/knew even less about Einstein’s ideas about God. Alister McGrath has written a great introduction to Einstein’s contributions to science and his concepts of God. He also explores how Einstein’s thinking about God can help the Christian believer (Einstein was a non-observant Jew) understand the relationship of science and faith.

The first half of the book is a textual summary of Einstein’s contributions to the world of physics. The next 25% of the book introduces the reader to Einstein’s understanding of God. The book ends by asking how Einstein’s methodology - both in science and in his understanding of God - can provide a framework for the believer to understand the relationship between science and religion. The author makes clear that the reader does not need to reach Einstein’s conclusions in order to appreciate and make use of his methodology as he or she seeks to weave together the two seemingly disparate worlds of knowledge.

Well-referenced, using Einstein’s own words and those of his contemporaries, citations are frequent and helpful as they refer the reader to the author’s source material. The author uses no mathematics other than a half-dozen references to Einstein’s most famous equation, E=mc2. The Advanced Readers Copy I received contained no pictures, but throughout the book are notations that “ILLUSTRATIONS TO BE PROVIDED IN THE FINAL BOOK”. The illustrations may help with understanding the author’s points, but the text itself is easily read and understood by the non-scientist.

For the scientist, philosopher, Christian, or seeker, attempting to better understand Einstein or the interconnectedness of science and religion, this book provides essential reading. College libraries and church libraries wanting to meet the needs of a diverse set of patrons will want to add this book to their collections. My geekish and nerdish friends will want to devour this book as well.
______________

Posted by Pastor Floyd at 3:45 PM No comments:

State of Lies - A Review 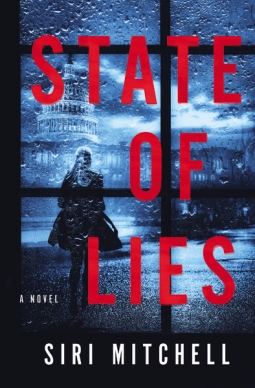 Georgia Ann Brennan’s husband had died in a horrendous hit-and-run car wreck six months ago, now her father had been nominated for the position of Secretary of Defense by the President - he only had to be approved by the Senate. And then her world turned upside down.

This political thriller held this reader’s attention from page one to the very end. Though we meet no politicians in this 350+ page book, the events described have the potential of disrupting the very core of the American government. In the course of telling the story, we examine the nature of grief, the cost of integrity, and the result of honesty. Georgie, as she was known to her friends, would experience a very difficult ride as she interacted with the CIA, FBI, and other government agencies. Into the midst of this mess stepped a Russian spy network that had roots into the deepest parts of the US government. Georgia Ann, her son Sam, and Alice, the family dog, would have to dig themselves out of the hole in which they found themselves.

Though published by Thomas Nelson, “a registered trademark of HarperCollins Christian Publishing”, I would have a difficult time calling this a faith-based book. There is nothing offensive within the story, but also little about faith. Would it appeal to Christian readers? Definitely, but because it is a well-written thriller with a story that, sadly, could be torn from the pages of today’s newspaper. For the same reason, it would appeal to any reader interested in finding a captivating thriller rooted in the world of 21st-century politics.
______________
This review is based on a free electronic copy provided by the publisher for the purpose of creating this review. The opinions expressed are my own.

Posted by Pastor Floyd at 2:18 PM No comments:

Better Watch Out - A Review 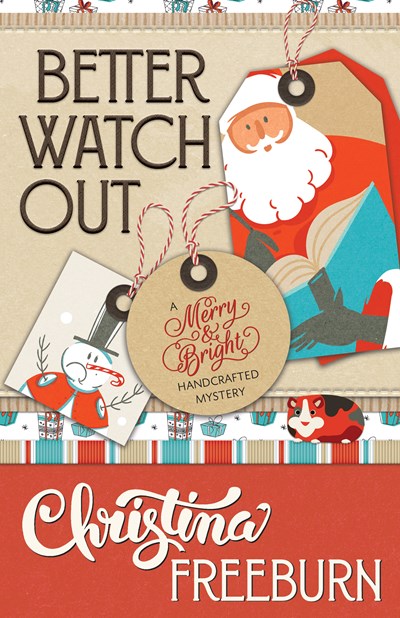 Merry Winters was finally beginning to learn that her hometown of Season’s Greetings was not as full of the holiday spirit as she thought - both before and after the death of Jenna Wilcox. In fact, Jenna was part of the problem and her death did not improve the picture.

Christina Freeburn introduces us to more of her town in this newest novel - much of the first novel in the series focused on a craft show where she found her ex-husband’s (or, so she thought) body found inside her new RV, soon to become Merry’s mobile craft shop. As this reader became familiar with Season’s Greetings, I decided that the Harmony Baptist Church would not become my new church home, though the book store might become a friendly place to plant myself on a warm afternoon.

But it was not just Merry Winter’s hometown that presented problems, but so did her family. Her step-daughter had boyfriend problems, her ex-husband’s mother was dying, her ex-husband’s new wife was not sure if her marriage was legal (hey, it was not clear if Merry’s divorce was final). Lots of problems and murders as well. They all contribute to a well-written cozy mystery that will satisfy a variety of readers. For the reader looking for a holiday read, whether Labor Day, Halloween, Thanksgiving, or Christmas, Better Watch Out might just fill the bill.
______________

Posted by Pastor Floyd at 5:25 PM No comments:

The Killing Tide - A Review 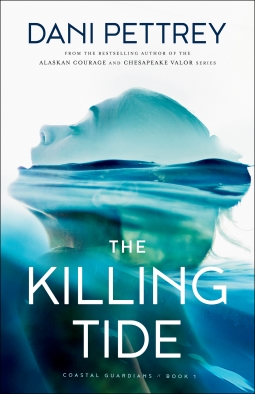 Dani Pettrey has a knack for writing faith-based suspense that draws her readers to wanting more. The Killing Tide once again accomplishes this task.

Gabby Rowley was a top-notch investigative reporter for the Raleigh (NC) Gazette. Her stories on Xavier Fuentes had assisted local enforcement in bringing down the major drug-kingpin and the seizure of $30 Million in cocaine by the DEA. Now Fuentes’ gang would stop at nothing to take Gabby down - permanently. Members of the Raleigh PD, her supervisor at the Gazette, and her brother, a member of a Coast Guard Investigative Service team, agreed she needed time to recuperate Wilmington West Virginia. Gabby was not quite ready for Finn Walker, her former boyfriend, to be a part of that same CGIS team.

While staying in Wilmington, Gabby stumbles into another smuggling crew. To get her story she would need to follow the CGIS team as they track down the smugglers and avoid the dangers presented by Xavier Fuentes as he escapes from prison.

Gabby and her family’s faith will provide guidance as they move ahead day by day. There are some who do not yet understand this thing called faith, but prayer may be able to move them forward.

Whether a reader’s personal library, a local church library, or a public library, The Killing Tide could easily find a home. If Dani Pettrey follows a similar pattern to her earlier works, we will be seeing additional using the same characters - this reader will be looking forward to those books.
______________
This review is based on a free electronic copy provided by the publisher for the purpose of creating this review. The opinions expressed are my own.

Posted by Pastor Floyd at 11:49 PM No comments:

Murder in the Balcony - A Review

Murder in the Balcony 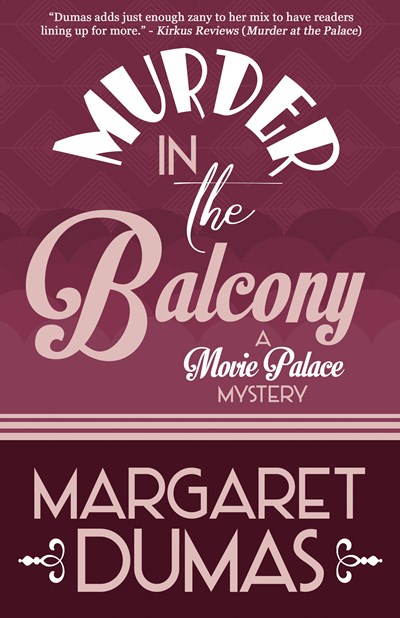 
Given one theater manager, a 80-year-old ghost, and a motley crew of theater employees, how do you find the person responsible for the murder of two real estate professionals? Carefully.

Nora Paige wore many hats. She managed The Movie Palace, an 80+-year-old movie theater in San Francisco that showed only oldies but goodies on the silver screen. She is separated from her two-timing, scheming husband, a film star in his own right. She is also the anonymous movie reviewer Sally Lee - a secret that she is hesitant to let others know. Finally, she is the only person who can see Trixie, the friendly ghost of a young usherette who had died in the early days of the theater’s history that had forgotten to leave after her death. Now Trixie spends her days assisting Nora (and indirectly, the police) find murderers associated with The Movie Palace.


In this second book based around The Movie Palace has a young student, Warren, who has graduated from The Movie Palace to work with June Howard’s real estate firm as an intern with a promising career ahead of him. Except he has disappeared - at least his body turns up at home apparently killed by a home intruder. It would take Nora’s skills as an amateur detective and Trixie’s skill as an unseen spy to find the person responsible for his death.

What makes these books special is that the author weaves Sally Lee’s reviews into the book - inviting even this modern moviegoer to watch some classic films from an earlier time. Sadly these films are so old that they are rarely found on the Amazon or Netflix subscription services. They can be rented - but who wants to rent when hundreds of movies are available from the traditional services.

For the fan of Turner Classic Movies, Murder in the Balcony will fill a whole while they wait for their next favorite movie to make its way to cable. Libraries may want to take Margaret Dumas’ books and build a movie collection around each one - the reader and the film buff will have a field day. And those who enjoy a cozy mystery will find The Movie Palace a good place stop.
______________
This review is based on a free electronic copy provided by the publisher for the purpose of creating this review. The opinions expressed are my own.


Posted by Pastor Floyd at 4:40 PM No comments: