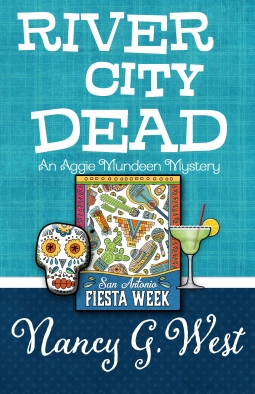 
Book Four in the series, but the second that I had the opportunity to read provides a fun romp through downtown Fiesta Week in San Antonio. Though taking place in 1998, the book reads like a modern cozy mystery starting with chapter one when a dead body, Monica Peters, is found in the penthouse suite of the CASA Prima Hotel.


Monica was not just a dead body, she was also the previous resident of the room that was to be Aggie Mundeen’s room for her San Antonio vacation and she was a personal friend. Despite Detective Sam Vanderhoven, Aggie’s special friend, insistence that she stay away, she couldn’t. She never did.


Monica Peter was the first victim, but not the last. Some were intentional - others consequential if the real target was to be killed. But Sam and Aggie would stumble on clue after clue toward a satisfying resolution.


The book held my attention as it moved through this river city’s version of Mardi Gras - even as the sitting moved by the wonderful riverside events to other locations throughout the metropolitan area. The descriptions would make one want to visit this historical city during Fiesta Week or at some other time of the year. The reader gets a glimpse of the culture that defines late 20th century - some of which can still be seen during Fiesta Week each year in San Antonio.