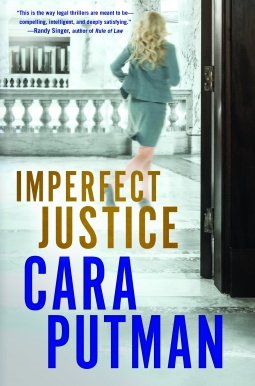 What do you get when you mix spousal abuse, three murders, and an abused child, a stalker, a group of female lawyers, and a successful investment manager - you get Imperfect Justice.  The author did a great job of pulling together too many sub-stories into a very satisfying novel that left this reader wanting more.

There were two reasons she could not let the case go. First, her own gut told her this young mother would not harm her children. And, then, there was Reid Billings. Reid was the client’s younger brother and, he, too, was convinced that something was amiss. But there was no proof - never was, never would be. Yet, if Emily did nothing, Kaylene’s younger daughter, Kinley, might be left living with a murderer.

Cara Putnam’s experience as a courtroom lawyer has allowed her to write a novel as intriguing as anything coming from the pen of John Grisham or Robert Whitlow. As in her previous book, Beyond Justice, the author weaves in just enough faith and romance with the law to make this book of interest to an assortment of readers. Though not a direct sequel to the earlier work, a number of characters do cross over and help flesh out this newest work. The connection between the two books does not detract from the current story.
______________
This review is based on a free electronic copy provided by the publisher for the purpose of creating this review. The opinions are mine alone.