Conan Doyle For The Defense - A Review

Conan Doyle
For The Defense 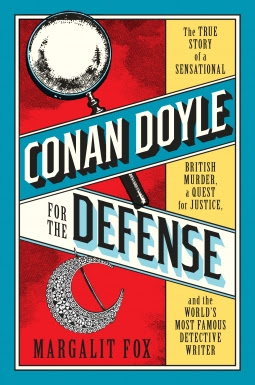 
Most readers know of Sherlock Holmes and the author who made him famous — Arthur Conan Doyle. But Doyle was far more than an author — he was a trained Physician with a practice of ophthalmology and he was a consulting detective (ala Holmes) in his own right.

This book describes the work Doyle completed for Oscar Slator over nearly 20 years in order that justice would be done. But the book is far more –
Margalit Fox has woven these various stories into a very readable tale that will enthrall both Sherlock’s fans, the reader of more traditional legal dramas, and the historian’s desire for more.

The book is fully documented (the last 30% of the book consists of references and notes). Though missing from my electronic ARC, the final book is said to be accompanied by maps helping the reader follow the character’s and the murderer’s path through Scotland and England. It is these added features, along with easy access to the Internet, which bring the book to life.

Though non-fiction, the book reads like a modern-day thriller. And that is what will make the book an inviting read to many 21st century readers.
______________
This review is based on a free electronic copy provided by the publisher for the purpose of creating this review. The opinions are mine alone.