George Whitfield: Evangelist for God and Empire - A Review 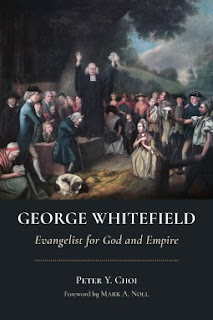 Coming from a Methodist background, I have often found myself intrigued by the relationship between John Wesley and George Whitfield. Later in their friendship ...


Although George Whitefield disagreed with John Wesley on some theological matters, he was careful not to create problems in public that could be used to hinder the preaching of the gospel. When someone asked Whitefield if he thought he would see Wesley in heaven, Whitefield replied, “I fear not, for he will be so near the eternal throne and we at such a distance, we shall hardly get sight of him.” [Wycliffe Handbook of Preaching and Preachers, W. Wiersbe, Moody Press, 1984, p. 255. Quoted in Galaxie Software. (2002). 10,000 Sermon Illustrations. Biblical Studies Press]


Though this biography touches on the relationship between the Wesleys and George Whitfield, its major focus is on Whitfield’s work of spreading the gospel in England and America and his contribution toward bringing English culture to the New World.

The work is scholarly and primarily aimed at that audience. The general reader will be less satisfied with the work, though some might be surprised. The book is readable and will be satisfying to many with an interest in English and American history or church history in general.

The author does an excellent job of preparing the reader for what is coming — both in terms of the book and in terms the book’s chapters and smaller divisions. This makes much of what follows easy to appreciate and understand.
______________
This review is based on a free electronic copy provided by the publisher for the purpose of creating this review. The opinions are mine alone.