Manga Classics: The Count of Monte Christo - A Review 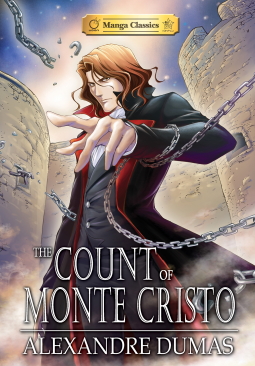 
At some point in the past I chose to read the huge book that is The Count of Monte Christo by Alexander Dumas. Manga Classics has designed an adaption of the original book - and, at 400+ pages, this manga book is also large.

Manga is unique - it is intended to be read starting from what we westerners would call the “back” of the book. Reading then proceeds toward the “front”. At first, this may seem a bit discomforting, but it quickly becomes second nature and the story moves along. The artwork (except for the covers, all artwork in my review copy is black and white) makes the story understandable and enjoyable to one who has long ago forgotten the plot and themes developed in Dumas’ original. I tried to discover whether the paperback version of the book included color images, but could not locate a copy to answer this question.

The story is one of revenge - as Edmond Dantes and his family are driven to ruin by those who would seem to be friends. It would take decades for Edmond to be in a position where he could exact the revenge, and occasionally offer the forgiveness, which his betrayers required. As the editor of this version notes in his postlude, the story in its original is complex. He and his team of artists have worked hard to translate the story into this modern format for the 21st-century reader. The editor makes it clear that the story has been carefully “trimmed” to combine the main flow of the story. He includes a brief essay outlining the “Rules of Trimming” used by the team as they made their decisions on what to include and what to exclude from the original story. In the same essay, he explains how the artwork was developed - both for the characters and for the settings. This included travel to the sites used in the book so the art might better represent the actual scenes rather than merely an artist’s imagination. I particularly liked the two-page “Character Relationship Guide” that is used to assist the reader in piecing together the many individuals that play a part in Edmond Dantes’ story. I expect this guide would also help a reader as he or she makes their way through Dumas’ original work.

For those looking for a new and enjoyable way to enjoy classic stories, Manga may provide one means to do so. You do lose the author’s original insight and nuances - but … this reader enjoyed the new journey through the old material, perhaps others will as well.
______________
This review is based on a free electronic copy provided by the publisher for the purpose of creating this review. The opinions expressed are my own.