Death At High Tide - A Review 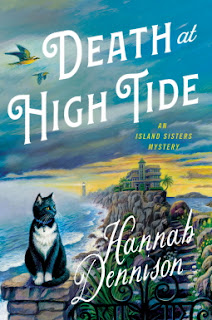 by
Hannah Dennison
A new author for me that has written the perfect cozy mystery including an old, somewhat deprecated, hotel; an old, mostly abandoned, lighthouse; and a cat who sees far more than many of the key players in the story.

It has been a rough month for Evie Mead. Her husband had died with a heart attack, he had died bankrupt, and she almost inherited the Tregarrick Rock, a hotel set among the Scilly Isles - at least until someone pointed out that they were known as “The Isles of Scilly--or Scilly, but [were] never called the Scilly Isles”. Situated off the coast of Cornwall in Southern England, they provided a wonderful spring vacation site for tourist. Evie and her sister decide to take a brief respite while they wait for Evie’s husband’s estate to be settled. While there two murders occur - and they are the prime suspects!

The story is well-written though it moves a bit slower than this reader might hope. The first 50% of the book is focused on setting up the characters and setting for the story. The tides play a major role as they move in and out in their daily rhythms. And the cat, wait until you hear what he has to say!

It was a pleasure to read this book and comes highly recommended.
______________
This review is based on a free electronic copy provided by the publisher for the purpose of creating this review.  The opinions expressed are my own.