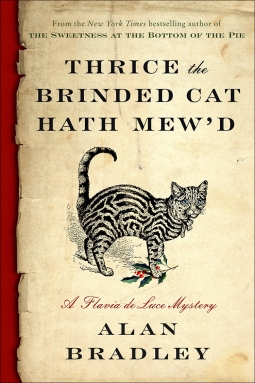 It is time for the BBC to offer a new mystery series staring Flavia de Luce. It would fit right along side those they have done earlier with Miss Jane Marble and Mr. Hercules Poirot. Reading Alan Bradley’s latest work, the reader is taken back to the early 1950’s, almost seeing the story played out on the black and white TV sets of the era.

Flavia has returned from her exile in Canada to a rather indifferent family. Her father is in the hospital, and others are at odds with her because she has inherited her mother's ancestral home where the entire family now lives. Shortly after returning home, she stumbles on a rather bizarre death scene (was this becoming a habit?) of a man she was just beginning to know. In the days to follow, as winter and Christmas set in, she will find herself two steps ahead of the police as clues accumulate. It is never clear to the reader whether the Inspector Hewitt appreciated her contributions or not - though, Flavia has no doubt as to how that question would be answered.

As this reader had not read previous works from this author, this story was not difficult to follow on its own. The only exception to this comment is perceiving the time frame for the book. Its regular mention of a war did not make it clear until somewhat later into the book, whether the reference was to the Bore Wars (ala Murdoch), WW I, or WW II. Eventually the reader can discern the time - but the uncertainty does not impact the telling of the story.

For the reader looking for an early winter (or even a midwinter) book, Thrice the Brinded Cat Hath Mew’d may well fill in one week of reading. Give me a hearty fire during a snowy week of cold, blustery weather, and one will feel right at home with Flavia, Gladys (her bike), and the family in jolly old England.
______________
This review is based on a free electronic copy provided by the publisher for the purpose of creating this review.  The opinions expressed are my own.