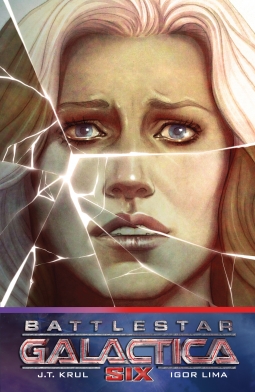 The Cyclons are just beginning to wage war on the twelve colonies as the story begins. They have realized that their existence is superior to that of humans - in essence they have evolved from the beings that created them. Now they want to dominate. The are gathering forces.

This story appears to look at the story of Battlestar Galactica and the Cylon war that preceded it, not form the human point of view, but from that of the Cylons. One Cylon in particular, Eve, has seemed to lost her way. And is at some point caught between her role as a Cylon and her outward identity as a human. The final resolution of her conflict is not yet clear - time will tell.

The artwork is well done - with a collection of modern graphic art and photographic images. The story is a bit difficult to follow and appears disjointed until close to the end of the book. The the ending is not entirely satisfying (hey, the author and illustrators do want the reader to read the next book in the series), it does begin to make some sense. Because the time period predates the original TV show, the connection to the earlier iterations of the series is hard to determine other than the presence the of Cylons themselves.

For the reader willing to take another view of the Cylon war and its implications for the human race, this new line of comics just fill the bill. It was fun to relive some of what may have been in an earlier time.
______________


This review is based on a free electronic copy provided by the publisher for the purpose of creating this review.  The opinions expressed are my own.
Posted by Pastor Floyd at 7:40 PM