The End of Protestantism - A Review

The End of Protestantism 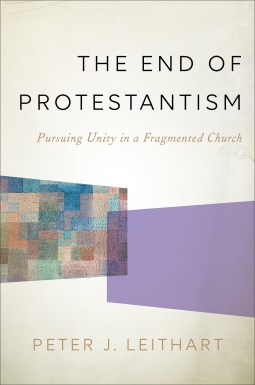 The Protestant Church at the beginning of the 21st century is a broken and fragmented church; often more defined by what we are not, than by what we are. Dr. Leithart argues that our goal is to become one church as Christ prayed, “... that they may be one, just as you, Father, are in me, and I in you …” The flaw with this desire is that it is a heavenly goal, one that we expect to see at the end of time, not one we will see completed by broken people living in broken relationships. Ideal, yes; but not one likely to be seen this side of eternity.

In some ways, the author argues that the church was closer to this ideal at its beginning. As the church grew geographically, the ties to its early apostolic roots began to disintegrate. Five-hundred years later Martin Luther nailed his 95 thesis to a church door, creating more division. Calvin, Zwingli, and the other reformers added to the  splintering of the church - even though their goal, as their name implies, desired to reform the church. As governments began to support one splinter group after another, the splits became more ingrained into culture and a future unit more difficult to envision.

When the church crossed the Atlantic and made its presence known in the new world, the divide grew. Different divisions claimed different territories - the roles of the Dutch Reformed, the Anglicans, the Catholics, etc., in their various colonies cemented their differences. But as the colonies had to work together to form a new country, so the churches had to learn to cooperate. The result was a grudging acceptance, but not real unity. We have gotten to the point, as I mentioned in my introduction, where we define ourselves by what we are not, rather than by what we are.

But we cannot stay where we are - we need to move toward a unity much as the Father has with the Son.

The biggest problem I have with Leithart’s goal is that he neglects to take into account that we are working with broken people in broken churches. I expect that a 21st century unity will recognize our differences and that those differences will give each local church strength and weaknesses. Much as the various spiritual gifts come together in a local body, the various strength and weaknesses of a community of local churches must come together to build the Kingdom of God.  Rather than using our differences to divide us, let us use our difference to build the Kingdom, one stone at a time.
______________


This review is based on a free electronic copy provided by the publisher for the purpose of creating this review.  The opinions expressed are my own.
Posted by Pastor Floyd at 11:37 PM