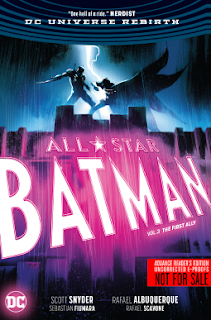 
The world knows the early history of Batman, the man whose parents died one evening when out for dinner. Bruce Wayne would be raised by the families faithful butler, Alfred. What most of us do not know (this reader at least did not) is the early history of Alfred Pennyworth and his connection to British Intelligence. This edition of All-Star Batman provides some of that backstory.

The story moves back and forth between flashbacks and current history, occasionally making the story difficult to follow. But even with that small flaw, the story is fun and kept this Sexagenarian's interest. The artwork (both for images displaying the past and that displaying the present) appears to show a somewhat aged set of characters. I might expect the modern set of characters to show aging - but it was disappointing to see some of that same aging to appear on the historical Batman et al.

I expect those who are fans of DC Comics or Batman, whether earlier generations of the story or of the current generation will find the story and book of interest. I know I did.
______________


This review is based on a free electronic copy provided by the publisher for the purpose of creating this review. The opinions are mine alone.