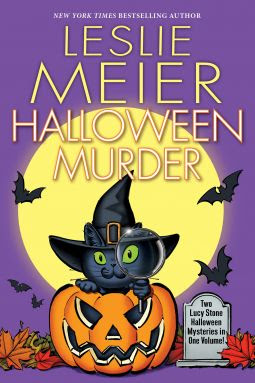 Leslie Meier has been a favorite author for over 20 years — long before I began formally reviewing books. I have read many of her holiday mysteries over the year — usually feeling very satisfied. The current book did not do so.

The current book is a combination of two earlier works. The first is a reprint of Meier’s Trick or Treat Murder published in 1996. The story was a standard Meier holiday cozy mystery centered around a series of suspicious fires that were occurring in and around Tinker Cove. Standing alone, I would give this book 4-stars.

The second book in this volume is a reprint of Meier’s Wicked Witch Murder (2010). The quality and presentation of this second work was considerably lower than that of the first. The book does not center on a holiday – though it does conclude there. Rather the focus of the book is on a rather uplifting presentation of the Wiccan religion. Nothing in the advertising or preliminary material prepared me for this.  As a conservative, evangelical Christian I felt that the author’s attempt at sneaking this faith into the novel was inappropriate. If she had been open and above board on the setting of the book, I could have and would have chosen to not review the book. I have read many Christian mysteries and thrillers, but the authors and publishers have been open about the role that faith will have in the plots and themes of those books – not so with the second story in this volume. Given the underhanded way this second book was presented, I am left giving it a single star.

The result is a book with a 2-star (maybe 2-1/2-star) review. On the other hand, I would look forward to seeing additional book pairings from the extensive collection of books from Meier’s library.
______________
This review is based on a free electronic copy provided by the publisher for the purpose of creating this review. The opinions expressed are mine alone.
Posted by Pastor Floyd at 12:38 PM