Murder, She Encountered - A Review 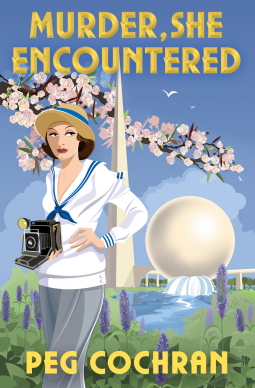 Elizabeth “Biz” Adams is the crime photographer for the New York Daily Trumpet. Ralph Kaminsky is the reporter to which she is assigned. Together, with Detective Sal Marino (Biz’s “boyfriend?”), they will need to identify and find the murderer of the unidentified young man pulled from one of the lakes at the 1939 New York World’s Fair.

Along with a fun jaunt through the fairgrounds and the subway system transporting visitors to and from the fair, we also get a glimpse of the historical events and settings of the era. This reviewer was particularly fascinated with the mention, albeit brief, of the SS. (sic) St. Louis’ arrival from Europe. Though the details are not discussed in the current book, a quick search of Google showed how similar the attitude of Americans in 1939 parallel those of many Americans in the 21st century, with similar results.

For the reader looking for a historical novel or just a good cozy mystery, Murder, She Encountered might just hit the spot.
______________
This review is based on a free electronic copy provided by the publisher for the purpose of creating this review. The opinions expressed are my own.