The Computing Universe - A Review 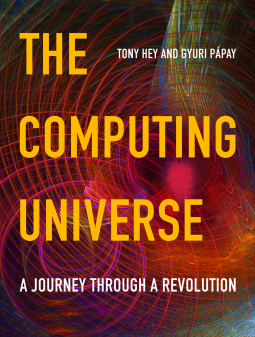 by
Tony Hey and Gyuri Papay

I began my computing journey early by most standards - in 1966 as part of an explorer post sponsored by IBM in Sacramento, CA.  We spent time learning COBOL (which made little sense to me at the time) and FORTRAN (a good match for beginning interests in the sciences).  I had no idea how early in the history of computers my experience came - I grew up with computers, at least as portrayed in Sci-Fi from the late fifties and early sixties.

Later, my formal education would allow me to program in FORTRAN and Assembly Language.  Other environments presented themselves as I completed a Masters degree in Computer Science Education at the University of Evansville.  Eventually, I spent nearly 24 years teaching computers at the postsecondary level in both public and private institutions. I enjoyed that career.

This book, The Computing Universe, allowed me to re-walk through much of that career - its history and its accomplishments.  The book begins with history and jumps into the details that define the field of Computer Science as defined by its science and art.  I remember one question on a final exam for a course that I took as part of my Masters degree asked, “Is Computer Science an ‘art’ or a ‘science’.  My reply to the question was neither, it is a craft.  Many people can put together a computer program, but it takes a well-trained practitioner, a craftsman,  to create a really good program.  The Computing Universe convinces me that I was correct then - and it is still true today.

The authors claimed to  have aimed the book at the high school senior or college freshman, though I expect that parts would be more readable off the shelf to a college graduate.  The chapter entitled “Mr. Turing’s amazing machines” (sic) begins by saying “WARNING: This chapter is more mathematical in character than the rest of the book. It may therefore be hard going for some readers, and they are strongly advised either to skip or skim through this chapter and proceed to the next chapter. This chapter describes the theoretical basis for much of formal computer science.”  I would suggest similar warnings be attached to other chapters as well (e.g. the chapter on “Algorithmics”).  Having said that, I would think that the book might be readable by anyone with a college education or the high school preparation for a college education.  Though not written as a textbook, the book could serve as the text for a entry level Computer Science course designed for non-majors (given appropriate lecture support) or as an ancillary text in the first course of a Computer Science major.

I enjoyed the review of my last fifty years - from high school to retirement.  I would invite anyone with an interest in Computer Science and its foundations (both historical or theoretical) to join me in reading The Computing Universe.
_____________