Evidence That Demands A Verdict - A Review

Evidence That Demands A Verdict
(The Completely Updated and Expanded Classic) 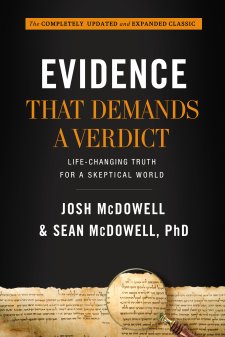 Let me begin with a bit of truth in advertising. I was an invited member of the original Launch Team for the newest version of “Evidence That Demands A Verdict”. In return for being a part of the Launch Team, I received an e-book version of ‘Evidence” and a tee-shirt promoting the book. However, the e-book was flawed. By design, the pre-publication version that we were sent included a large watermark in the middle of each page, making it very difficult to read (at least for this reader). In spite of being a part of the Launch Team, I decided it would be unfair to review a book I could not fairly read.  Two months later I found (using my normal review book resources) an opportunity to receive and review a hard copy of the book. This review is based on both the original “Launch Team” version which I received last June and the hard copy I received earlier this month.

I remember receiving the original version of “Evidence” as a junior or senior in college. I devoured it. As a new believer, I wanted to know and understand as much as possible about this faith to which I belonged. Later, after graduating from seminary, I discovered a new version and purchased it. I remember trying to become as excited about it as I had the original - it was not to be. I do not if it was further education, my personal faith journey (which took an unneeded bounce during those years), the fact that I had changed the immediate direction of my career (from pastoral ministry to Computer Science college professor), or the book itself which caused the loss of interest; but I had lost interest.

The year is now 2017 and the third (or is fourth?) edition of this classic book is being published. The newest version is not one I would not want to sit down and devour (though I know there are some readers who have done that), but I would not want to miss having the newest edition on my shelf. Rather being aimed for the newly converted college student, this new book is aimed for the college or seminary classroom or for the desk and shelf of the pastor or scholar. For many, not sitting in a classroom, it will become a reference book, rather than late night reading. But it is a reference book that many (or most) believers will want on their shelves.

At just under 800 pages, the book addressed most of the issues attacked by modern critics of the Christian faith. Whether it be philosophy, religions, history, or science (plus more) the reader will be challenged to examine evidence for the Christian faith. Whether a believer, skeptic, or atheist, the critical reader will need to respond to the author’s arguments. The book is thoroughly referenced with in-text notes and a Bibliography providing complete details of each resource quoted or used in the book. The only missing element, for most students of the scripture, is a set of sources allowing followup to the many topics discussed in the book. It will become the responsibility of the pastor, the teacher, or the individual reader to provide access to additional resources on topics of interest.  It is this missing element that prevents this reviewer from giving the book a 5-star review.

The book is not general reading - it is aimed at the scholar. Few (are there any?) diagrams can be found within the covers, though charts are present as needed which will help the reader to process the evidence presented.
_____________
This review is based on free paper and electronic copies provided by the publisher for the purpose of creating this review. The opinions are mine alone.